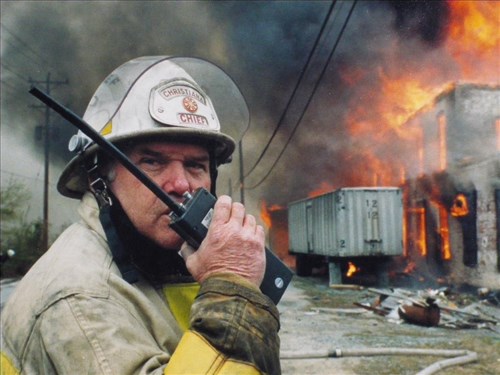 In February of 1973 Ken joined the Christiana Volunteer Fire Company. Over the last 37 Year’s he has held many positions in the fire company. He has been an Director, Engineer, Assistant Chief, Deputy Chief and held the position of Fire Chief for 7 years. Some of the highlights during his 37 years have been: • Heroic Firefighter of the Year in New Castle County in 1985 and 1991 • Heroic Firefighter of the Year in the State of Delaware in 1991 • Inducted into the Delaware Fireman's Hall of Fame in 1991. • President of the New Castle County Fire Chiefs Association in 1995 • Appointed to the Delaware State Fire Commission by then Governor Carper in 1998. • Elected Vice-Chairman of the Commission in 1999. • Elected Chairman of the Commission in 2000 and held that position for 6 years. • Retired from Fire Commission in 2010 after serving the allowed limit of 12 years. • Awarded the 2004 Sonny Wilkins Award for Distinguished Service by the New Castle County Volunteer Association. • Awarded the New Castle County Executive Distinguished Service Award in 2006. • Presented with Chief Emeritus of Christiana Fire Company at their banquet in 2011. During his career with Christiana and Motiva, Ken has interacted-with many people through out the country in the Fire Service. That has led to Ken to be appointed to several National Committees in the fire service representing the State of Delaware and Christiana Fire Company. Those that he continues to serving upon are: • Selected to represent Delaware on the National Volunteer Fire Council. • Appointed to the NFP A 1720 Standards Committee by the International Association of • Fire Chiefs, representing Delaware Volunteer Fireman's Association. • Appointed to a FEMA Emergency Response Technology Group Committee representing • International Association of Fire Chiefs. • Appointed by the International Association of Fire Chiefs and the United States Fire • Administration to serve on their Hazmat/ Homeland Security Committee. • Selected to be a panelist at the National Fire Academy for the Firefighter Grants Peer • Review Board every year since its inception. • Selected by the International Association of Fire Chiefs to represent them on a committee • as an advisor on a book being written for" First Responders Guide for Pipeline • Emergencies.”