On October 7, 1921, at a schoolhouse in Christiana, Delaware, the Christiana Fire Company was organized by a body of 20 men who saw the need for fire protection in the village of Christiana and the surrounding community.

The following officers were elected:

The Fire Company was officially chartered and incorporated on January 4, 1922. On March 31, 1922, the new company had less than $50.00 in its treasury, on which day it purchased a Waterous Type "C" Triple Combination Pumper Truck, and 1000 feet of hose at a cost of $4,000.00. This pumper was mounted on a Model "T" Ford chassis. The members responded to 23 alarms in 1924, of which four were in the village of Christiana itself.

During 1927, the Fire Company purchased the lot on which a portion of the present Station 12 now stands, for $ 500.00. This is the original section on the west end of the building, which consisted of two engine bays and was completed in 1928. Also at that time a second fire engine, a new 1927 American LaFrance type 91 500 GPM pumper was placed into service.

In 1937, the Fire Company purchased a 350 GPM triple combination pumper on a Chevrolet chassis, built by U.S. Fire Apparatus. The official engine "housing" was done by the officers and members of the Aetna Hose, Hook and Ladder Company, and was held in September of 1937 at a cost of $22.17. This would be the last "housing" held until May of 1989, when the Ladies' Auxiliary purchased a 1988 Chevrolet Van and housed it for the Fire Company.

On March 19, 1957, the property next door to Station 12 was purchased for $10,000, $7,000 of which was placed in mortgage. In addition, an order for a new Tank Truck, a 1957 Seagraves 750 GPM pumper with a 1,000-gallon tank was placed. In May 1960, a contract was signed for an addition to the Fire Station consisting of three engine bays with two doors and repair of the roof. In November of the same year, a motion was passed to have our first Annual Banquet, at a cost of $5 per couple, to be held on February 18, 1961 in the engine bays. The Banquet was for our members, auxiliary, and invited guests. The Chairman of the Banquet Committee was Edward Naumann. Sadly, Edward Naumann would become the only member of our company to die in the line of duty while fighting a house fire on Howell School Road in Kirkwood.

During 1966, a rescue truck and 4-wheel drive brush/field unit was placed in service. In 1970, the company purchased its first ambulance and in November of that year, the groundwork was laid to add two engine bays and a banquet hall. This resulted in the structure as it exists today. During the same year, a motion was passed that all members with over 25 years of service are made life members.

In 1971, we acquired our first aerial truck. This was a 1951 American LaFrance 75' ladder from Aetna Hose, Hook and Ladder Company of Newark. The Aetna membership had voted to give the ladder truck to The Christiana Fire Company.

In order to meet the growing needs of our fire district a contract was signed to begin construction of our first satellite station, Station 6 on Porter Road in Bear. The building was completed and opened the following year, housing two engines and a rescue pumper.

In 1994 we opened are second satellite station, Station 3, on Salem Church Road at a cost of $500,000. Two engines, a brush/field truck and an ambulance were placed in service at this station. During this same year, we also hired our first paid EMT/Firefighters to help meet the increasing needs of our residents.

In 1995, we placed our fourth ambulance in service and equipped all ambulances with Automatic External Defibrillators (AEDs). Increasing the number of responses, especially ambulance calls, resulted in hiring two additional paid EMT/Firefighters.

In 1996, we celebrated 75 years of service to the citizens of the State of Delaware and New Castle County. The continually increasing demand for emergency services has required us to double our paid staff to ensure we can provide the high level of quality service the communities we serve, expect and deserve.

Today the Christiana fire Company has the tremendous task of providing fire protection and basic life support ambulance service to the residents of our district, which comprises 1/7th of the state’s entire population. Our Fire and Ambulance responses continue to increase, with runs totaling over 13,000 per year.

Christiana Fire Company, with its highly dedicated and motivated volunteer and career members, has become the busiest combination fire company in the state and one of the busiest combination companies within our nation. The aims and dreams of that small band of men who founded this Fire Company in 1921 are still with us. Just as they organized to give unselfishly, so do the men and women of today's Christiana Fire Company. We hope that they would be as proud of us as we are of them. #ChristianaFire 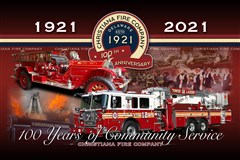 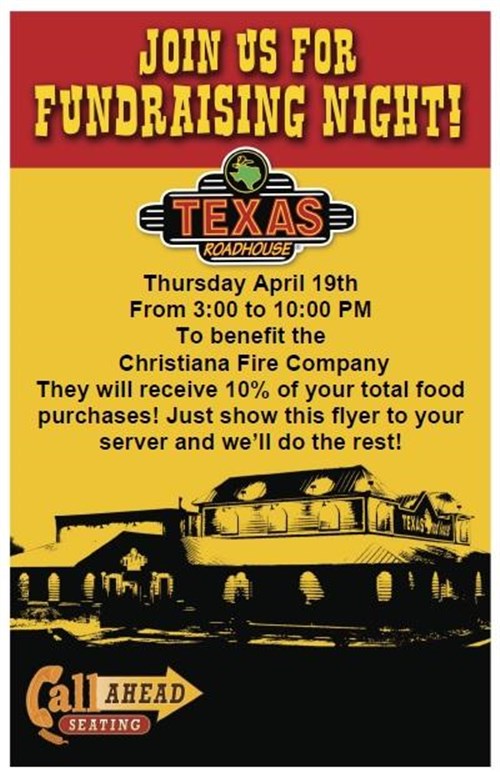